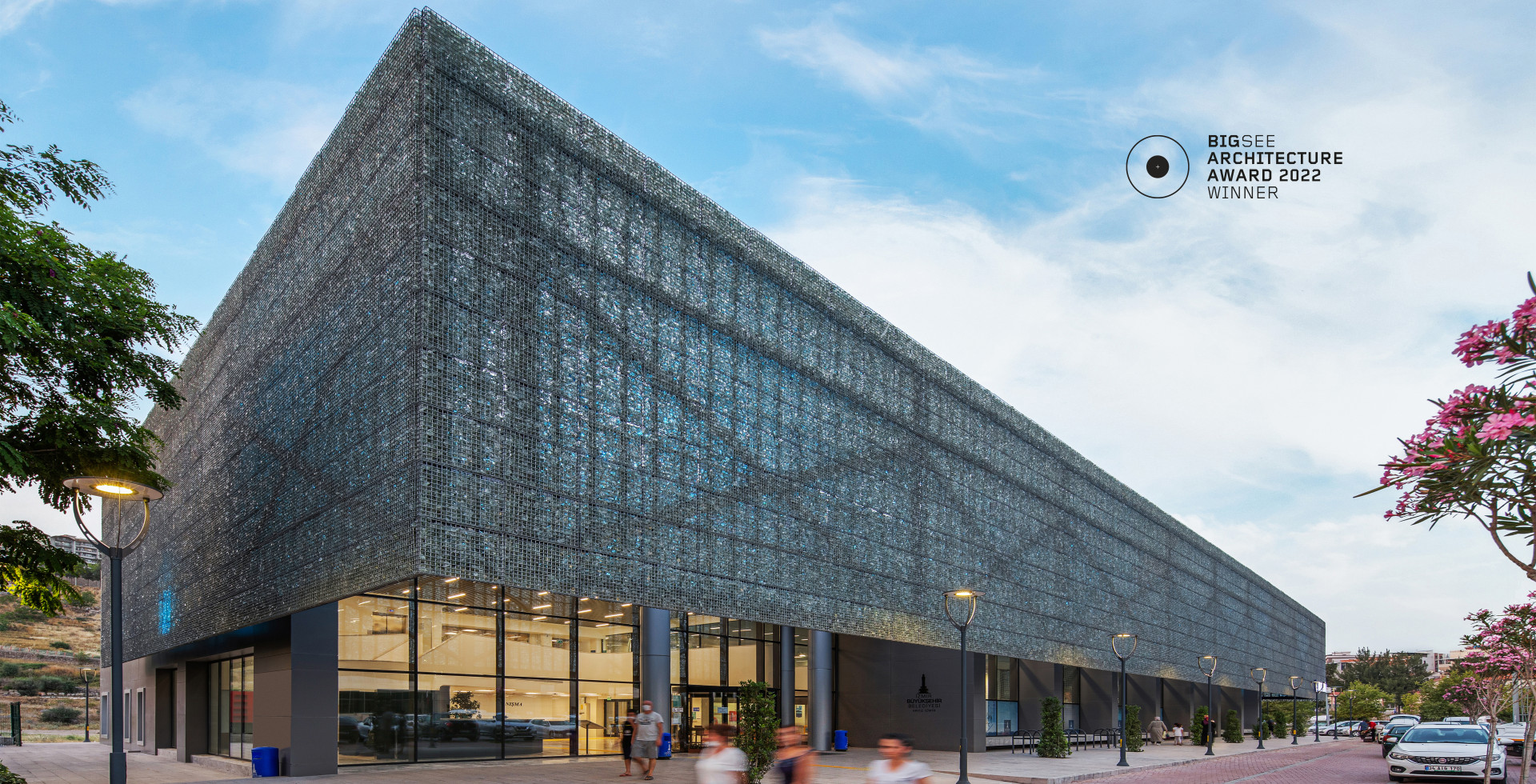 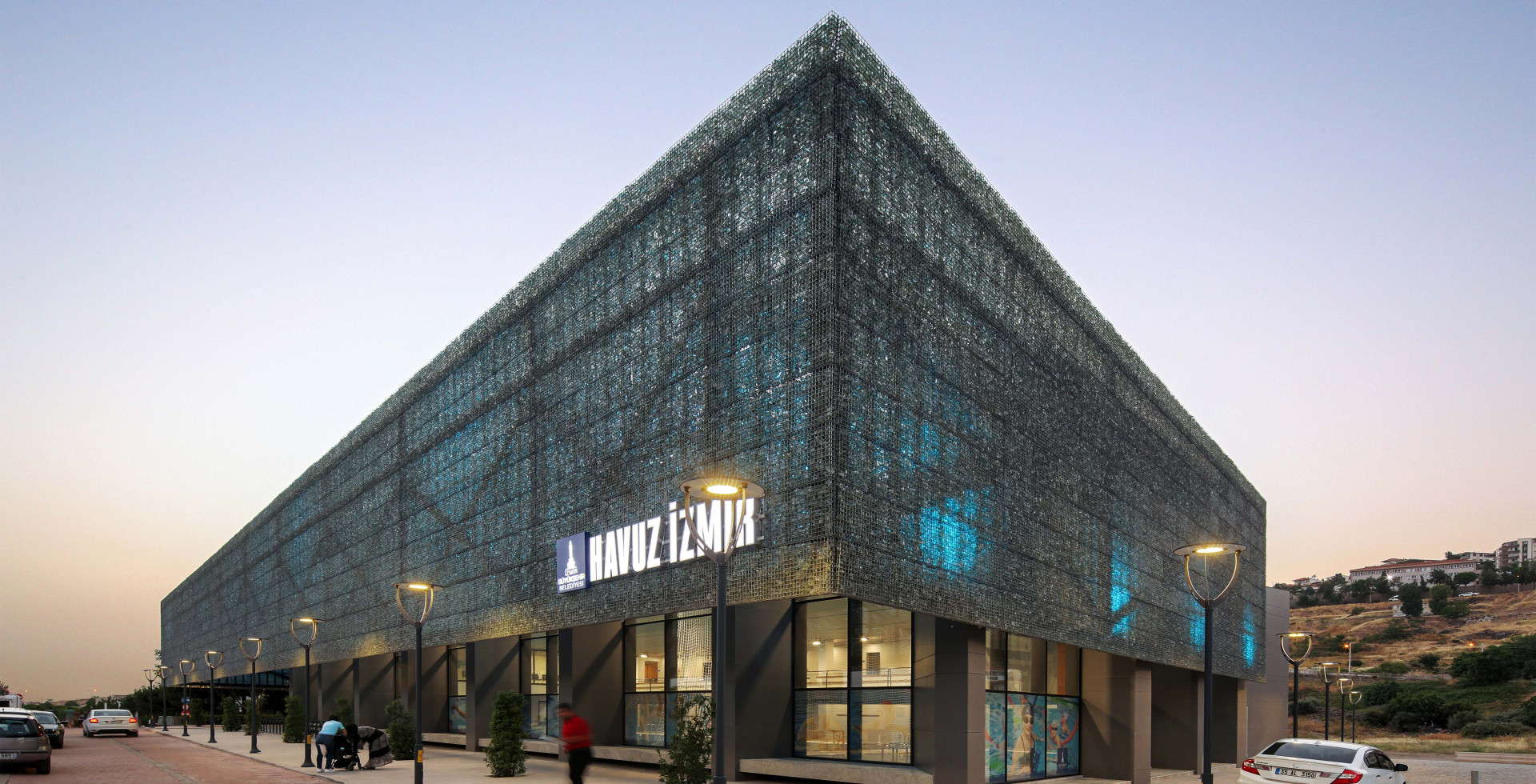 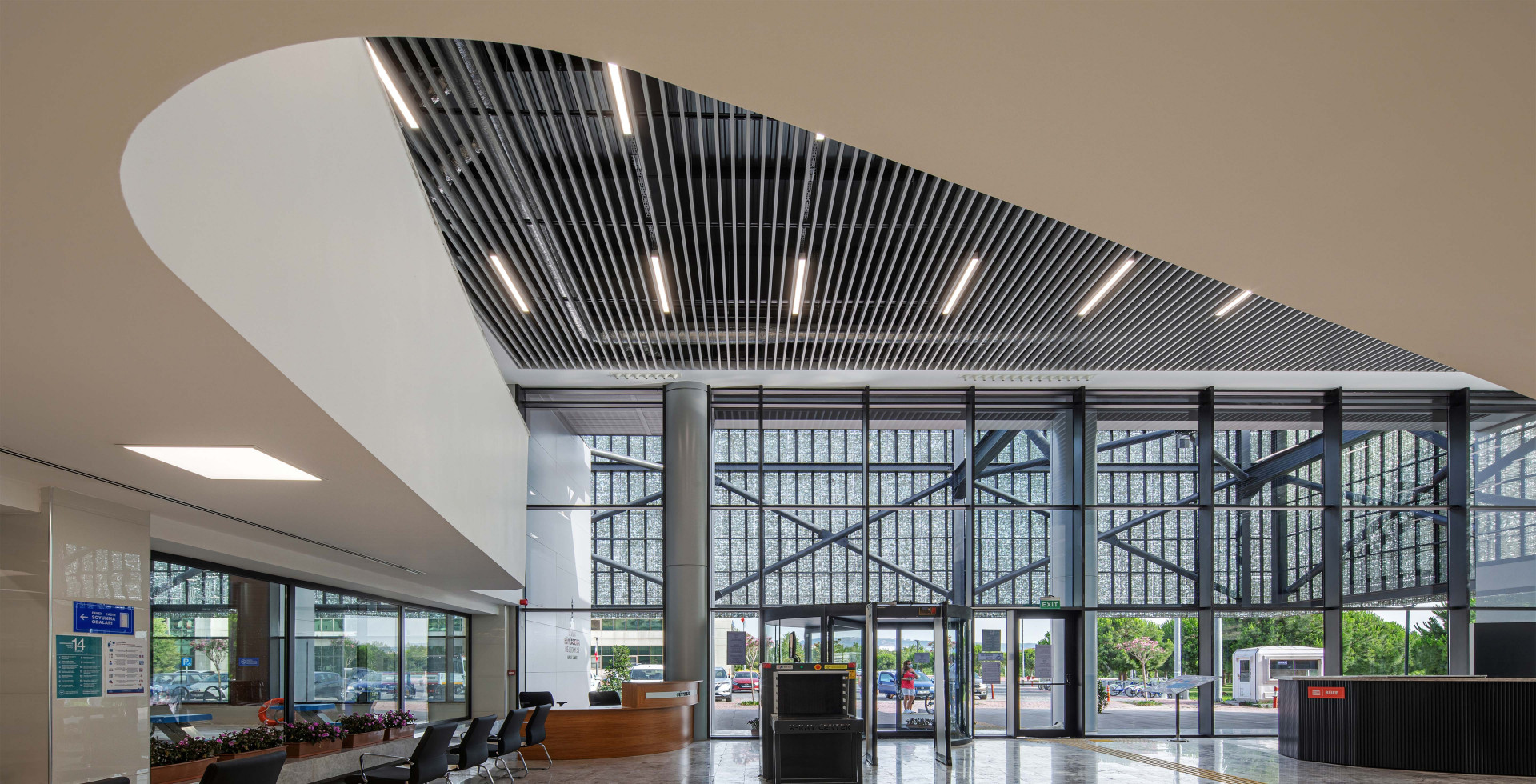 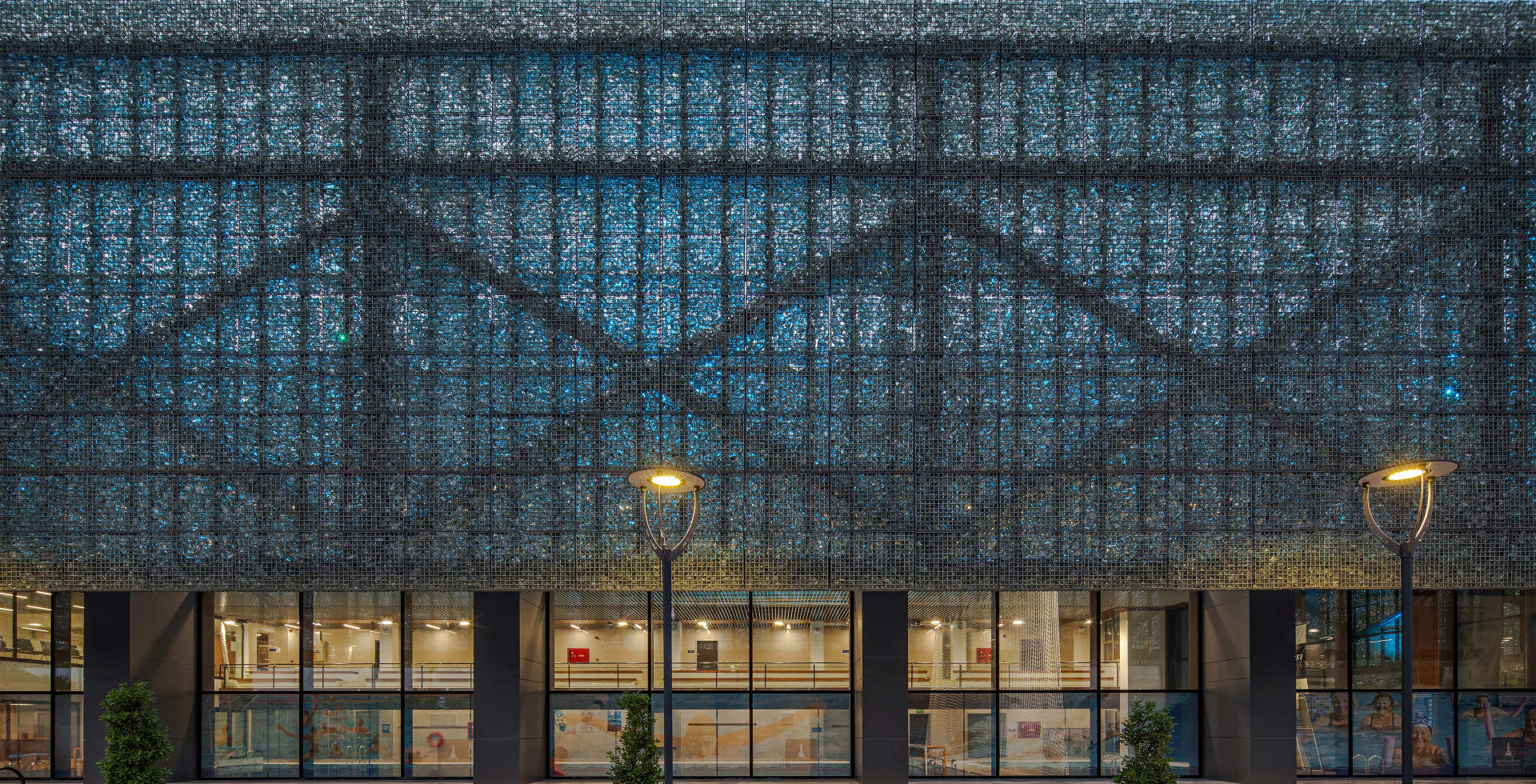 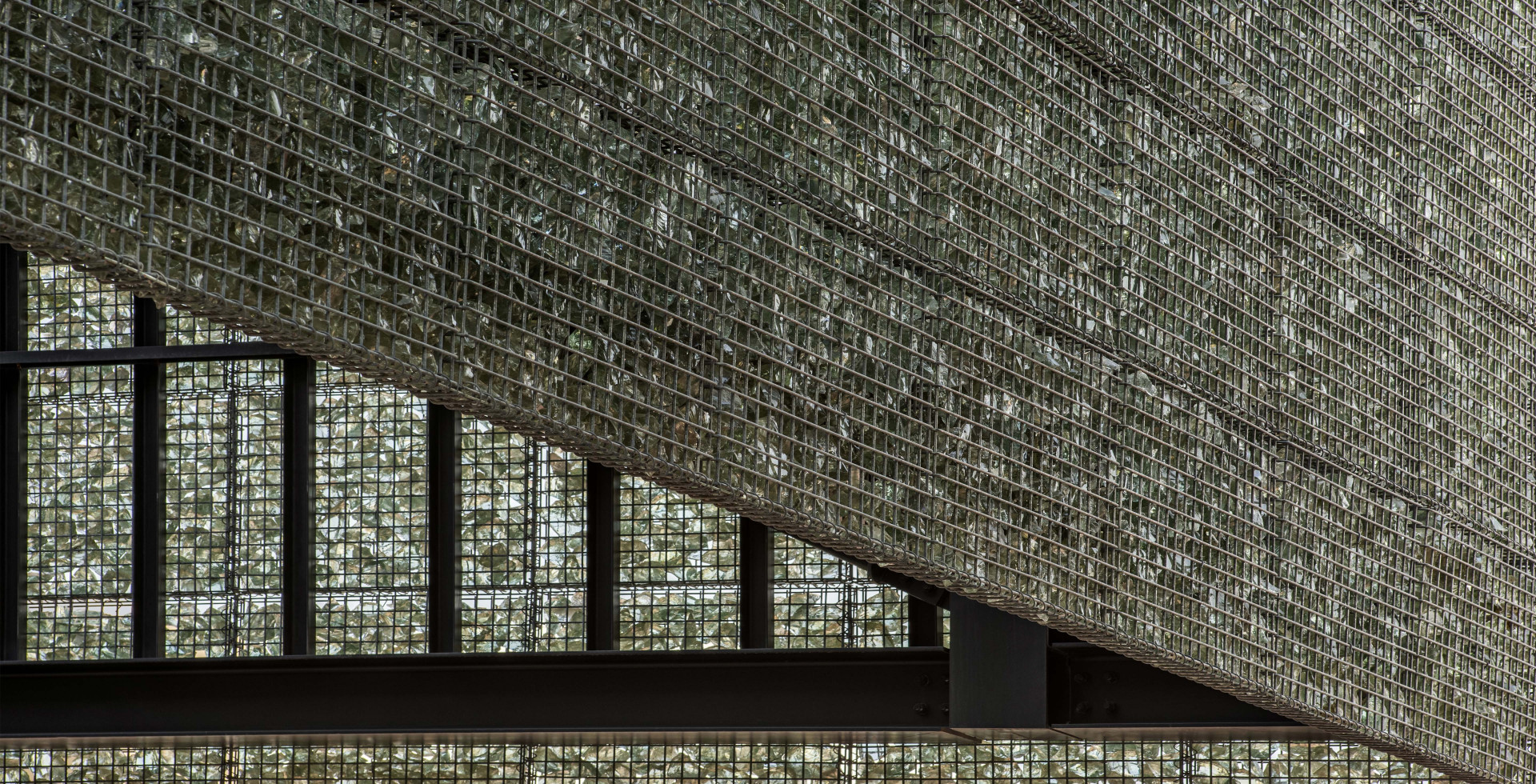 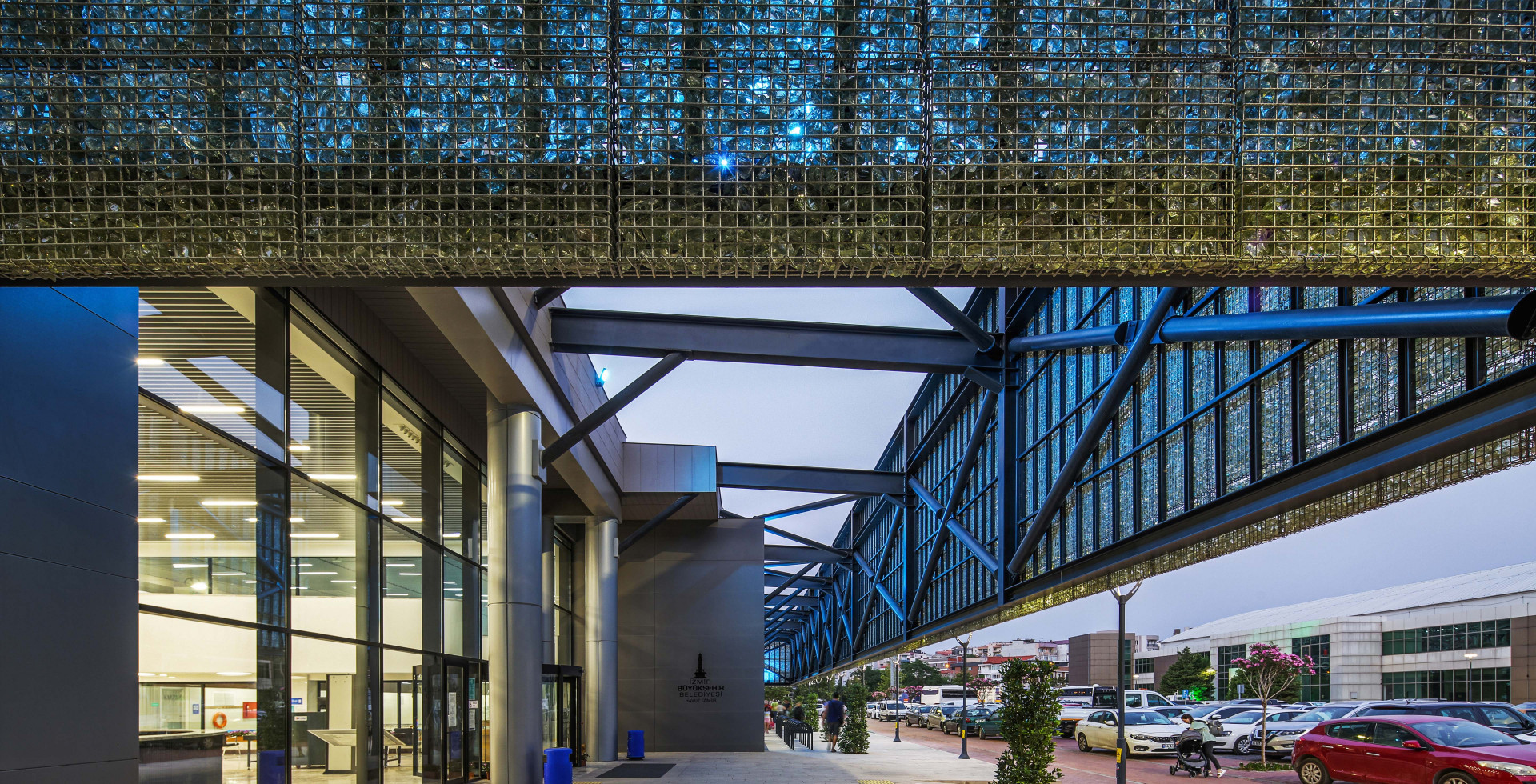 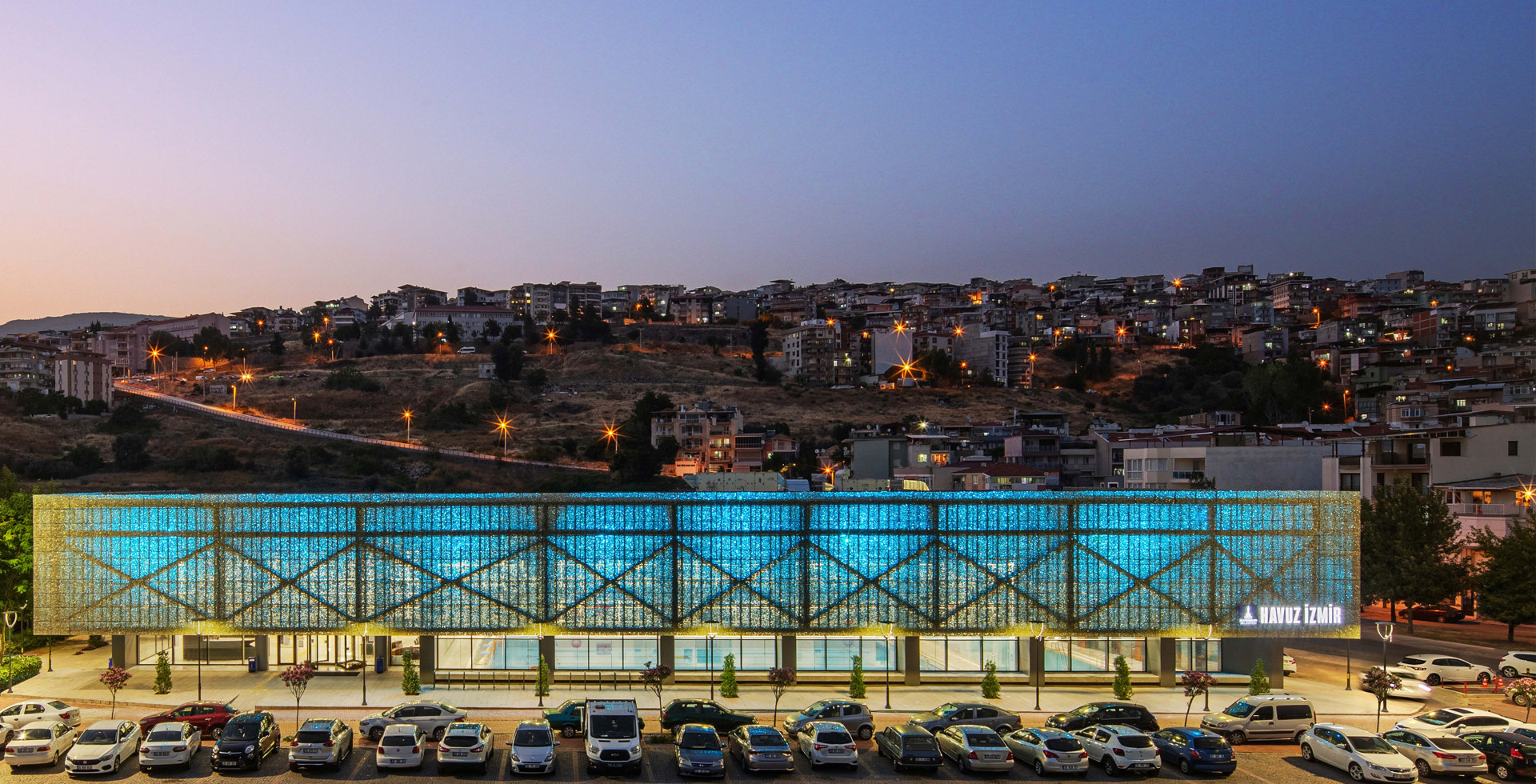 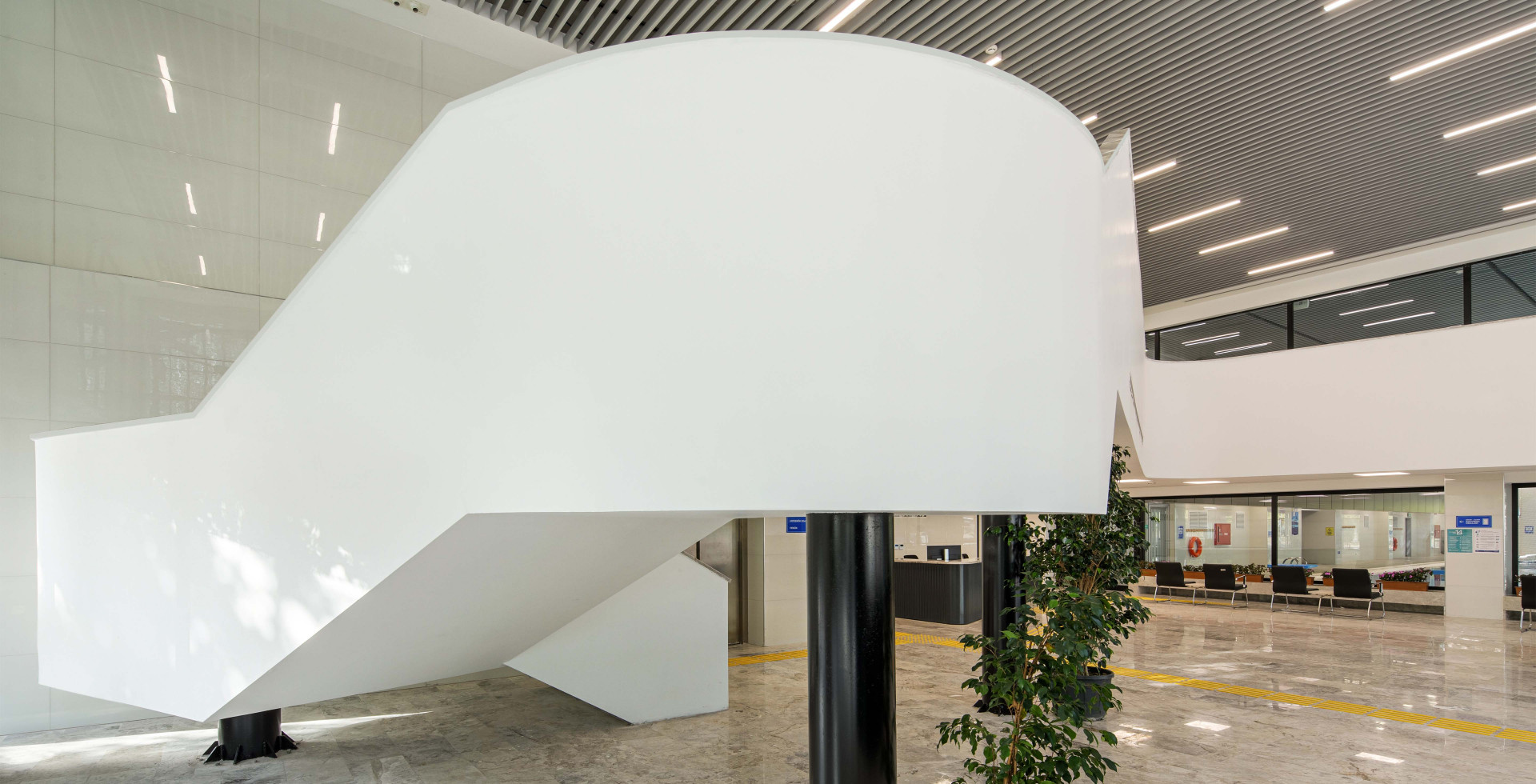 Due to its easy access to the main arteries of the Izmir transportation network, the facility, which will serve not only the regional but the entire city, also aims to meet an important need of the developing and increasing population in its immediate vicinity. It is possible to reach the building by bicycle, private vehicle or public transport. Due to its location, the building, which has a lot of people passing by, also serves the purpose of attracting people's attention and arousing curiosity towards water sports. There is a semi-olympic 4 meter deep pool measuring 25 x 12.5 m in the building with a closed area of ​​3.200 m². The building, which has a spectator capacity of 200 people, also includes a sports hall designed for the needs of the athletes.

The shell, which provides solar control on the south and west facades, consists of a gabion wall made of glass rocks, which is a waste material. The designers describe the shell that surrounds the building as follows: “We found it valuable to make a structure that we experience without our clothes, visible through the shell that surrounds it, and to highlight it. In a sense, the shell has come to a point that envelops both the building and the people. The shell is knitted with contrasts. Despite its whole appearance, it was made from thousands of small parts. Despite its heavy appearance, it remained suspended from above without stepping on the ground. Despite its opaque appearance, it was actually made of clear glass. Our first aim was to achieve the unrepeatable and unimaginable atmosphere created by the light and reflections leaking from the shell. The primitive stone walls built for landscaping in the area where the building is located gave us this inspiration. These stone walls turned into the shell of the building with a new interpretation. Bringing the light into the interior by filtering it from the shell, the location, size and randomness of the spaces in the building envelope, the luminous effect and light shadow games created will make the experience of the building unique.” 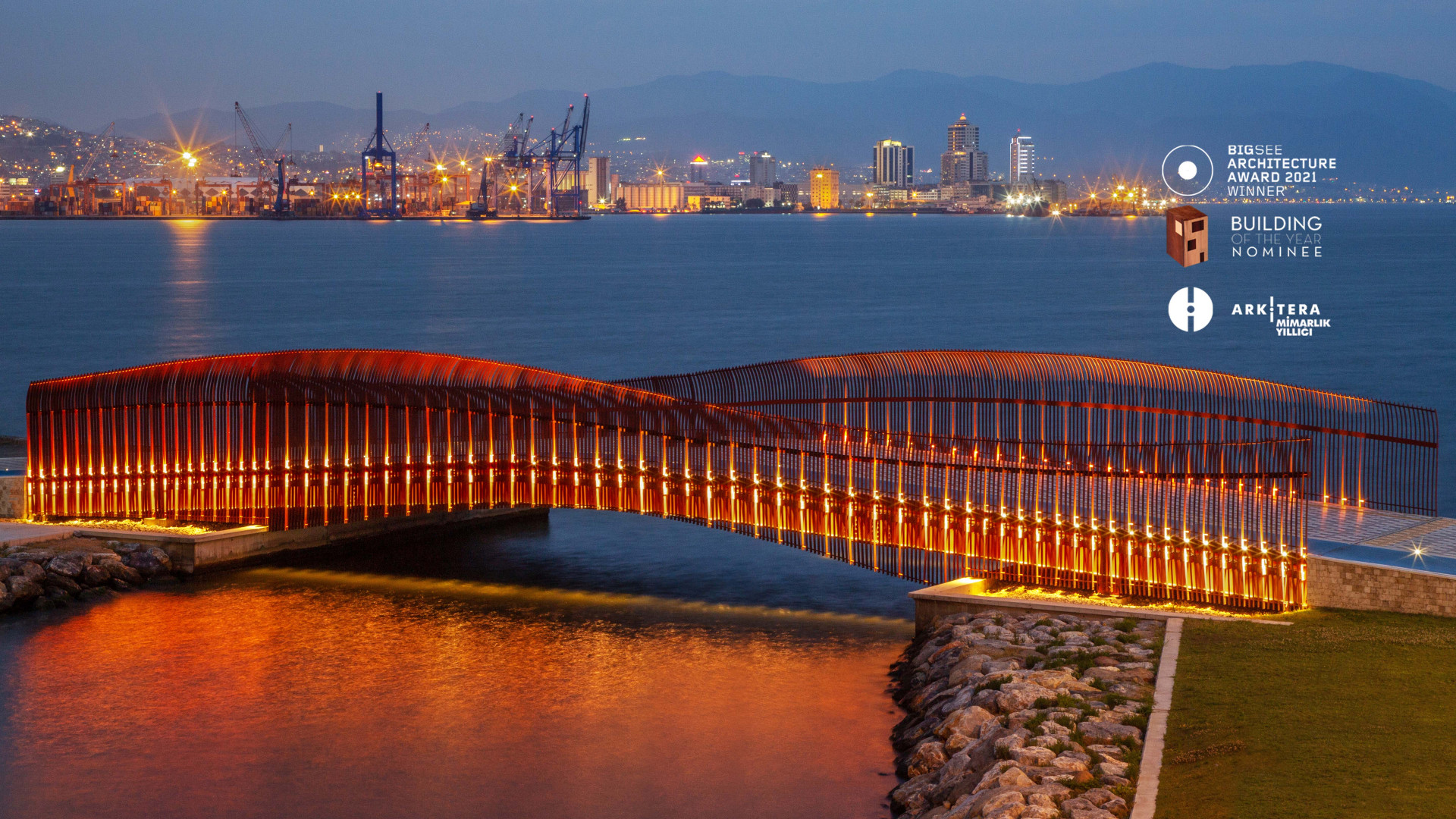 Star of the Beach 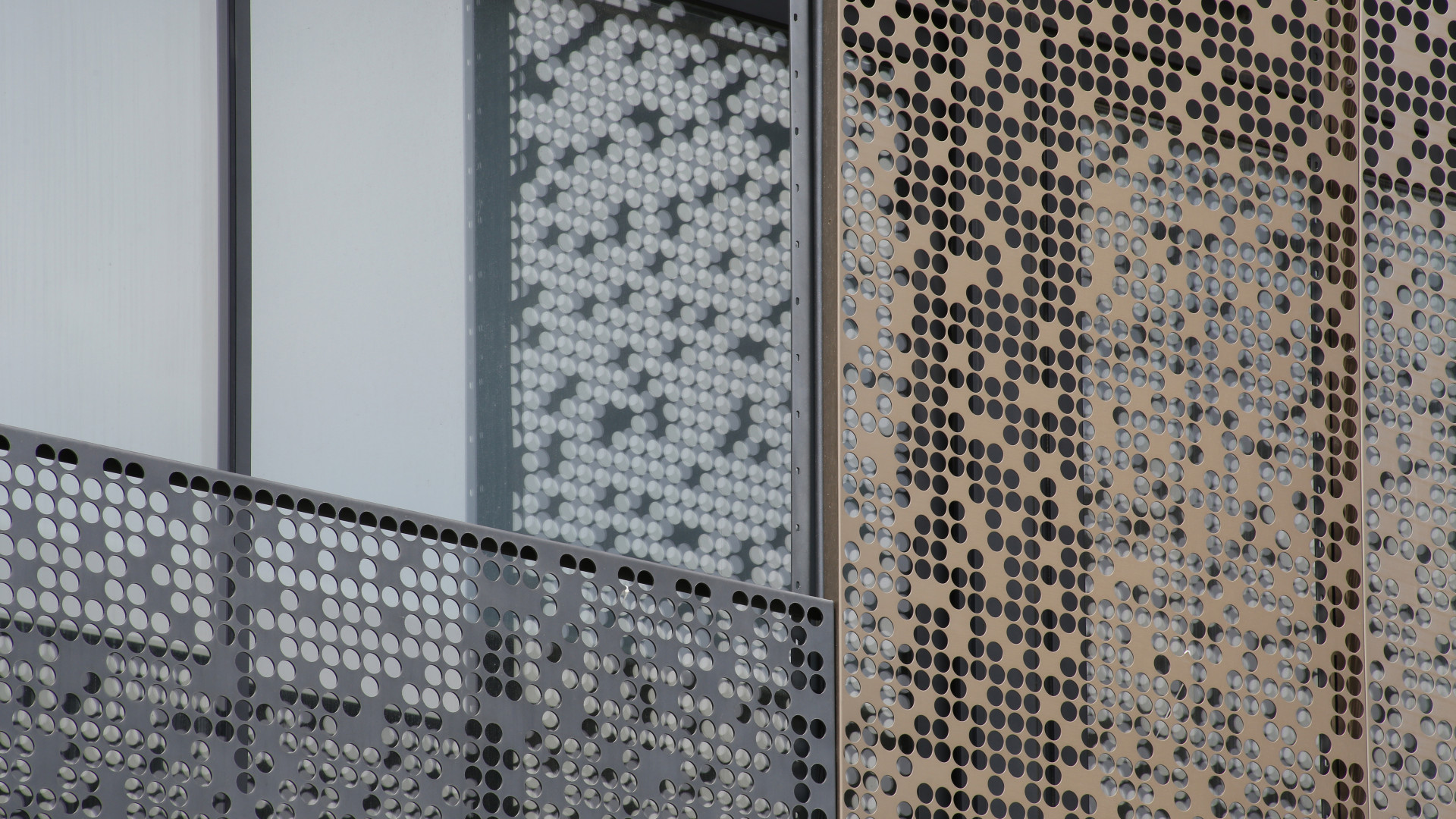 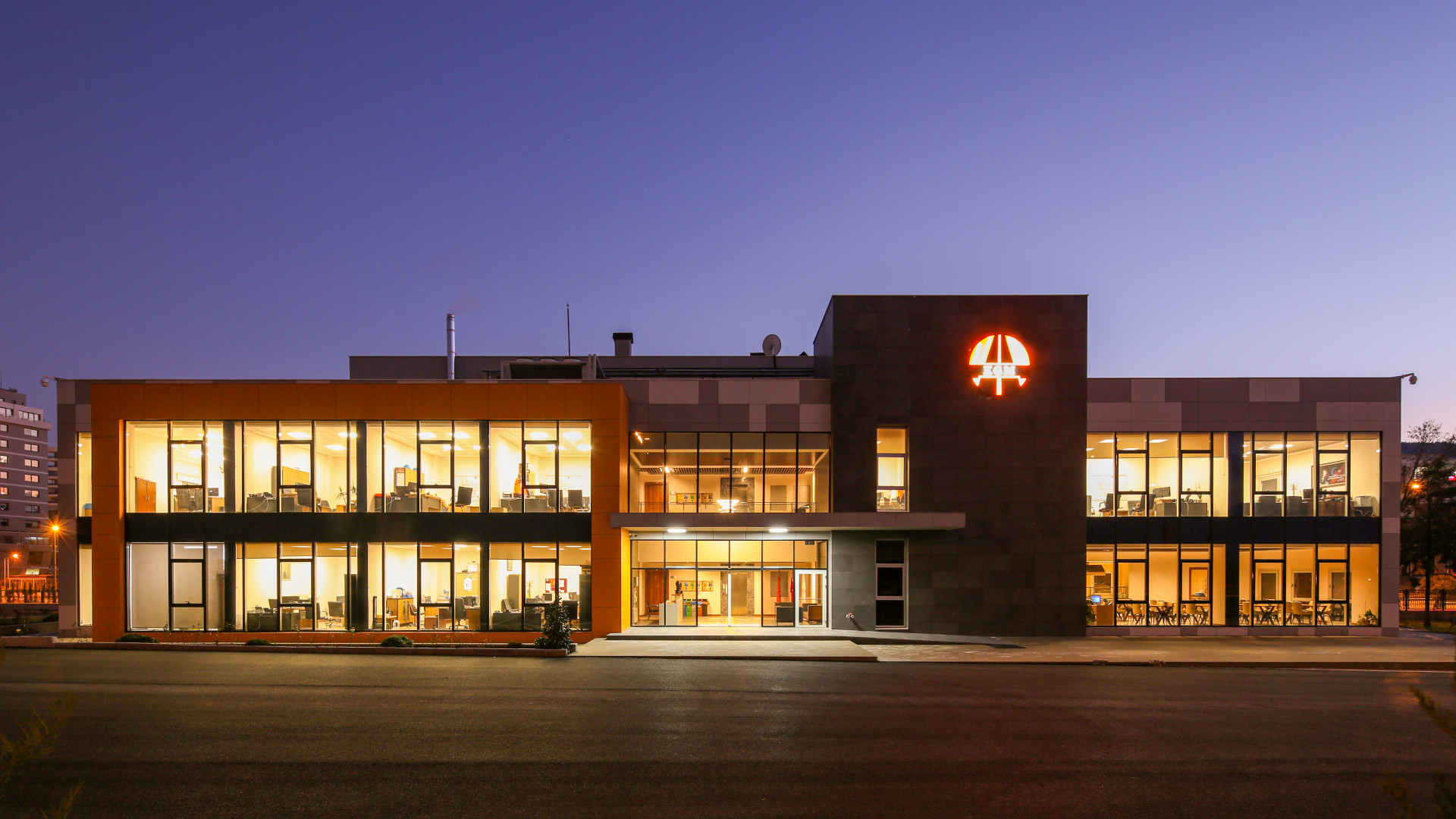 Copyright © 2022 Not Architecture. All rights reserved.